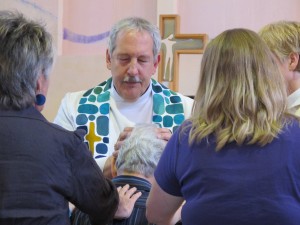 Pr. Steve has a Masters of Divinity (M.Div) and an MA in Theatre Arts.  His years in ministry have taken him from the streets of the Tenderloin in San Francisco to the streets of Danville. Steve previously served as the President of the Interfaith Council of Contra Costa County and remains actively engaged in deepening Interfaith connections within the community. Pr. Steve provides compassionate pastoral care and is a gifted preacher who enjoys creative worship. He has maintained a long-standing involvement in and passion for justice advocacy; he is a Master teacher of Tai Chi Chuan. Steve and Bev have three sons, and three grandchildren. Theologically empowered within his own tradition, he feels free to explore, learn about, encourage and celebrate other faith traditions.
Sr. Pastor Steve Harms: [email protected] 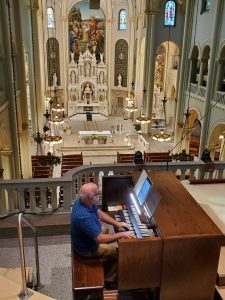 Gary grew up in a small farming town in Wisconsin and left home at 19. Church music and accompanying singing congregations have always been part of his life. Beginning as a church musician at age 12, over the course of his career he has served in parishes from Guatemala, Honduras, the islands of Guam, Hawaii, Guaymas, Mexico, Los Angeles, Santa Barbara, Las Vegas, San Francisco and Oakland to his current position at Peace Lutheran as its Director of Music. A former Franciscan Friar, Gary studied music and liturgy at UCSB, Holy Names College, and the Franciscan School of Theology. Gary also served in the US Navy from 1978–86. In the last 18 years he’s been active with the San Francisco Lesbian/Gay Freedom band and the San Francisco Gay Mens’ Chorus. Gary has performed in Seattle, Vancouver, BC, Philadelphia, Denver, Miami, SF, New York, Chicago, Koln, Germany, in parades, concerts, field shows, protests, and Presidential Inaugurals just to name a few! Gary loves playing music, BBQing, and growing edibles in his yard.
Music Director: [email protected] 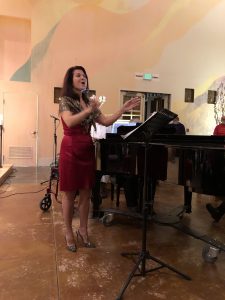 Lyric Coloratura Soprano, Elizabeth Hunter Ashley, is a professional vocal soloist, vocal philanthropist, recording artist, adjudicator, voice teacher, and the Peace church choir director. As a featured concert soloist, her most recent tour was in June 2019 where she traveled to the East Coast as the soloist and member with Blackhawk Chorus. In her solo career, Elizabeth has worked with over 16 orchestras spanning the United States in California, Illinois, Nebraska, Minnesota, New Jersey, and internationally in Italy, Austria, and France. She works as a collaborator with Bay Area composers and other professional artists in Concert, Musical, Recital, Opera, Sacred Music.
Elizabeth has performed lead roles in Minnesota, Nebraska, Kansas and California; as a soloist and member of Opera Omaha, The Heartland Opera Theatre, Bellevue Theatre, Livermore Opera, Diablo Light Opera Company, The Willows Regional Theatre, and as a National Anthem performer in Minnesota, Nebraska and California. Elizabeth held the title of Miss Austin 1984 and Miss Minnesota 1985 as well as being awarded the 1985 Miss Minnesota talent winner. She competed as Miss Minnesota in the 1985 Miss America Scholarship Pageant.
Elizabeth is the proprietor of the “Elizabeth Hunter Ashley :The Performance Studio”.  She is an adjudicator for vocal competitions with CMEA and NATS. Elizabeth is a former Master Teacher`-15 years for SF Girls Chorus and 5 years for Young Woman Choral Project in SF. She was also a coach for 5 years at Acalanes High School and 2 years at Monte Vista High School. Her most recent award is the 2018 award for “Best Vocal Instructor” in Danville, CA. She holds a Bachelor of Music Degree from The University of Kansas and Master of Music degree in Vocal Performance from The University Of Nebraska at Omaha. She is also a Hall Of Fame recipient from Austin Minnesota High School and winner of a Concerto Competition, NATS, and other various awards.    www.elizabethhunterashley.com

We are holding Worship together, Sundays at 10:00a; Recorded Worship will be available soon after.

We look forward to seeing you!